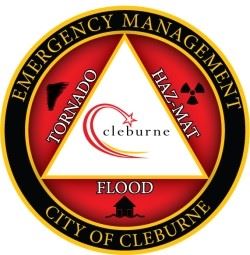 The ability to safely evacuate residents during a disaster depends on strong disaster preparedness planning and requires the cooperation of all affected citizens. Evacuations require the establishment of emergency shelters during disasters for evacuees, and, significant coordination among City departments during disasters is critical in order to maintain essential City services.

The City’s Emergency Management Coordinator (EMC) is part of the Cleburne Fire Department. The EMC oversees the operation of the City’s twelve (12) Outdoor Warning Sirens. The City also uses CivicReady to provide real-time alerts on impending inclement weather, possible disasters, and evacuation and shelter information.  CivicReady is a free-to-the-resident subscription service that sends notices to the subscriber's cellphone by text, recorded voice message, and email.

The City of Cleburne has eighteen (18) low-water crossings. During periods of heavy rainfall or high potential for flooding, the Cleburne Police, Fire, and Street Departments monitor these crossings and roadways for flooding. City crews use barricades and swing gates to close roads that are inundated with water and to discourage traffic from driving through these areas.

The City also participates in the CASA radar system.  This radar system has a 25-mile range and looks at a lower portion of the atmosphere than conventional NexRad radar.  This allows for meteorologists to have a much sharper, more precise look at current weather conditions and track potentially dangerous weather with greater accuracy.