The City of Cleburne operates under a “Council-Manager” system of government. In this model, the Mayor and City Council are responsible for all legislative functions of the City. They appoint a professional City Manager who operates much like a CEO in private-sector businesses and who is tasked with carrying out City Council’s legislative and policy objectives. 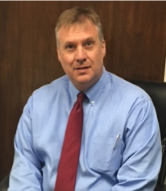 Steve Polasek joined the City of Cleburne as Deputy City Manager in August of 2016 before taking his current role as City Manager on December 17, 2016. Steve began his public sector career with the City of Hurst in 1992 serving in a number of positions culminating as the Assistant Director of Community Services.

In 1999, he joined the City of Southlake as Deputy Director, then Director of Community Services, where he served until 2008 at which time he accepted the Assistant City Manager position for the City of Keller. In April of 2012, Steve became the City Manager of Keller. Seeking an opportunity to be closer to the mountains he grew up near, in November of 2014 he was named City Manager of Roswell, New Mexico where he served until August of 2016. Prior to entering public service, Steve was in the private sector beginning in 1990 working primarily in the telecommunications field.