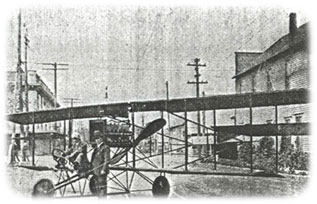 
Pictured to the right is “Old Soggy No. 1,” the first airplane built in Texas (as shown on East Henderson Street in Cleburne). At the controls is “Slatts” Rodgers, who built it with the help of John C. Fine, shown standing by the plane. The intersection shown is East Henderson and Wilhite Streets looking north on Wilhite. The six-cylinder, 100-horsepower engine was purchased in St. Louis for $750.

The airplane construction was started in a building near the site of the old post office, or what is now Cleburne City Hall and was finished in Keene. It was pulled to Cleburne from Keene by a pair of mules. It took six hours. Rodgers recouped some of his expenses by building a big wall around the plane and charged 50 cents admission to see it. In three days, he made $700 and was ready to fly!
View All
/QuickLinks.aspx
Agendas & Minutes
Live Meetings
Employment
Report It
Make a Payment
CivicReady Emergency Alerts
Government Websites by CivicPlus®
[]