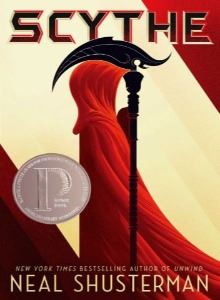 A world with no hunger, no disease, no war, no misery: humanity has conquered all those things, and has even conquered death. Now Scythes are the only ones who can end life—and they are commanded to do so, in order to keep the size of the population under control.

Citra and Rowan are chosen to apprentice to a scythe—a role that neither wants. These teens must master the “art” of taking life, knowing that the consequence of failure could mean losing their own.

Scythe is the first novel of a thrilling new series by National Book Award–winning author Neal Shusterman in which Citra and Rowan learn that a perfect world comes only with a heavy price.

Guy Montag is a fireman. In his world, where television rules and literature is on the brink of extinction, firemen start fires rather than put them out. His job is to destroy the most illegal of commodities, the printed book, along with the houses in which they are hidden.

Montag never questions the destruction and ruin his actions produce, returning each day to his bland life and wife, Mildred, who spends all day with her television “family.” But then he meets an eccentric young neighbor, Clarisse, who introduces him to a past where people didn’t live in fear and to a present where one sees the world through the ideas in books instead of the mindless chatter of television.

When Mildred attempts suicide and Clarisse suddenly disappears, Montag begins to question everything he has ever known. He starts hiding books in his home, and when his pilfering is discovered, the fireman has to run for his life.

In a society where unwanted teens are salvaged for their body parts, three runaways fight the system that would "unwind" them. Connor's parents want to be rid of him because he's a troublemaker. Risa has no parents and is being unwound to cut orphanage costs. Lev's unwinding has been planned since his birth, as part of his family's strict religion. Brought together by chance, and kept together by desperation, these three unlikely companions make a harrowing cross-country journey, knowing their lives hang in the balance. If they can survive until their eighteenth birthday, they can't be harmed - but when every piece of them, from their hands to their hearts, are wanted by a world gone mad, eighteen seems far, far away.

Katniss is a 16-year-old girl living with her mother and younger sister in the poorest district of Panem, the remains of what used to be North America. Long ago the districts waged war on the Capitol and were defeated. As part of the surrender terms, each district agreed to send one boy and one girl to appear in an annual televised event called, "The Hunger Games." The terrain, rules, and level of audience participation may change but one thing is constant: kill or be killed. When her sister is chosen by lottery, Katniss steps up to go in her place. (Scholastic Press, 2008)

Can twelve 12-year-olds escape from the most ridiculously brilliant library ever created?
Escape from Mr. Lemoncello's Library plunks a dozen sixth-graders into the middle of a futuristic library for a night of nonstop fun and adventure.
In a nod to Roald Dahl's Charlie and the Chocolate Factory, this fast-paced new novel features an eccentric billionaire who welcomes a group of children into a fantasy setting full of weird, wondrous touches.
Kyle is a game fan—board games, word games, and especially video games! Kyle's hero, the famous gamemaker Luigi Lemoncello, is the genius behind the design of the town's new public library, which contains not only books, but an IMAX theater, an electronic learning center, instructional holograms, interactive dioramas and electromagnetic hover ladders that float patrons up to the books they want.

by Jennifer Chambliss Bertman
For twelve-year-old Emily, the best thing about moving to San Francisco is that it’s the home city of her literary idol: Garrison Griswold, book publisher and creator of the online sensation Book Scavenger (a game where books are hidden in cities all over the country and clues to find them are revealed through puzzles). Upon her arrival, however, Emily learns that Griswold has been attacked and is now in a coma, and no one knows anything about the epic new game he had been poised to launch. Then Emily and her new friend James discover an odd book, which they come to believe is from Griswold himself, and might contain the only copy of his mysterious new game.

Racing against time, Emily and James rush from clue to clue, desperate to figure out the secret at the heart of Griswold’s new game—before those who attacked Griswold come after them too.