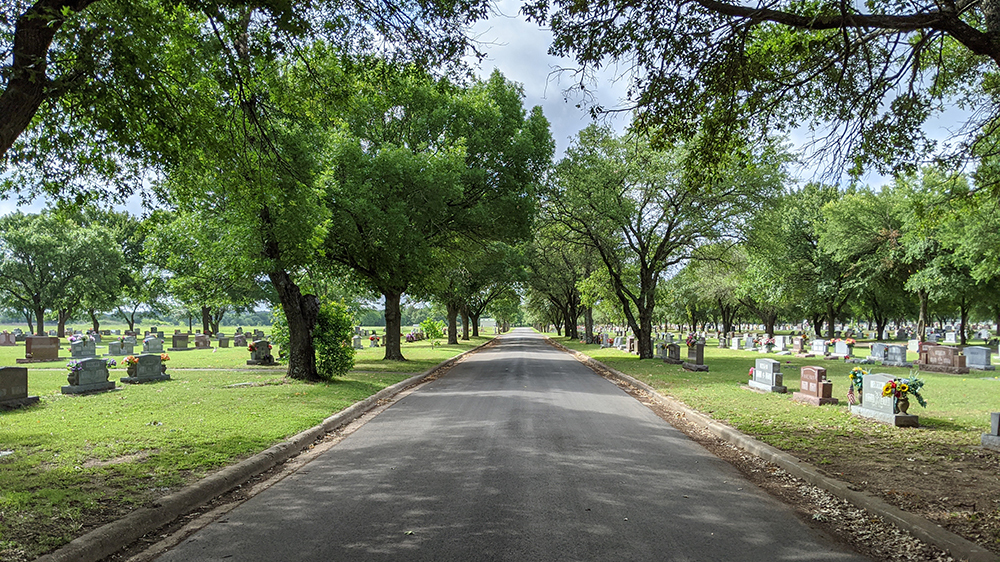 Cemeteries are not only the earthly resting place of our loved ones, but also a vast collection of information and history. For those researching genealogy they are an invaluable tool.

The City of Cleburne has the full operation of a Cemetery Department. This consists of four cemeteries: Cleburne Memorial, Rosehill, Greenlawn and Chambers Memorial.

Cleburne Memorial Cemetery was the third cemetery in Cleburne. A new cemetery was needed because the first cemetery was full and the second proved to be unsuitable for burials due to a formation of limestone some 50 feet thick underlying the location. In 1873, B.J. Chambers, a prominent Cleburne settler, donated one acre of land for the reburial of bodies. In 1876, five more acres were donated by Jeremiah Easterwood and Chambers donated another 10 acres. While many bodies were moved to the new location, some families objected to this practice and some bodies still remain beneath the homes and streets of Cleburne.

In 1894, C.Y. and Ann Kouns donated another tract of land for the cemetery to establish a Confederate Park for use by the Pat Cleburne Camp No. 88, United Confederate Veterans and their descendants. In 1880, the Cemetery Association purchased an additional 20 acres from R.J. Chambers to make the cemetery 36 acres. Some 12-14,000 bodies were buried in Memorial Cemetery between 1876 and the 1940s. In 1922, "The Confederate Memorial Park Committee" was formed. Its intent was to create a tribute to the Confederate cause by erecting a memorial arch and by cutting roadways through the park in a manner to "carry out the design of the Confederate battle flag." By June of 1922, the construction of the memorial arch was complete and two roadways were cut.

Although the arch still stands today, the cemetery is not laid out in the design of the Confederate battle flag. However, some 278 Confederate soldiers and seven Union soldiers are buried in the cemetery. Veterans of other wars are also laid to rest in Memorial Cemetery. There is a pauper's section of the cemetery and many of those graves are unmarked and the number of graves is unknown. More than 20,000 people are interred in this cemetery and there are many unidentified graves. The cemetery is still in use today.